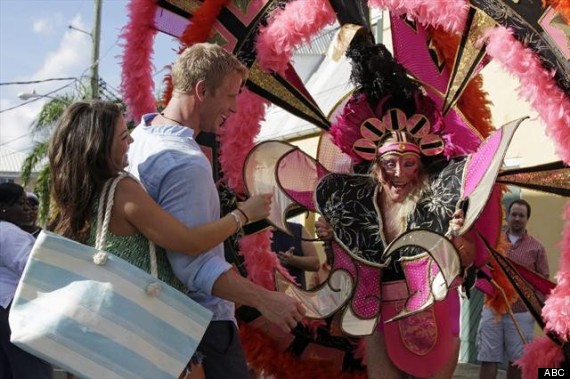 SPOILER ALERT!  This week marks the end of the Tierra-Era.  Personally we’re devastated because the drama was actually entertaining to a certain extent, but now it’s starting to get juicy as Sean is able to explore the personalities of the women he’s really compatible with–drama free.

Week 6 also marked the return of #ShirtlessSean as he cavorted around the beach with AshLee.  Any guy that can get Sean to take his shirt off goes up in the standings!  Speaking of #ShirtlessSean, despite the fact that Sean woke Catherine, Desiree and Lindsay up at the crack of dawn for their group date, their grogginess didn’t keep them from persuading Sean to take it off at the beach!  But the biggest surprise of all–because Sean taking his shirt of is appreciated but no longer a surprise–was that Lindsay, yes, the girl who showed up the first day to introduce herself in a wedding dress, took home the rose on the group date.  Ladies, should we say the new wedding dress trick is a good first date tactic?  Well, let’s not get too far ahead of ourselves…

Love is a gamble but the probabilities are good!

Here’s who we think Sean might take home in the end: 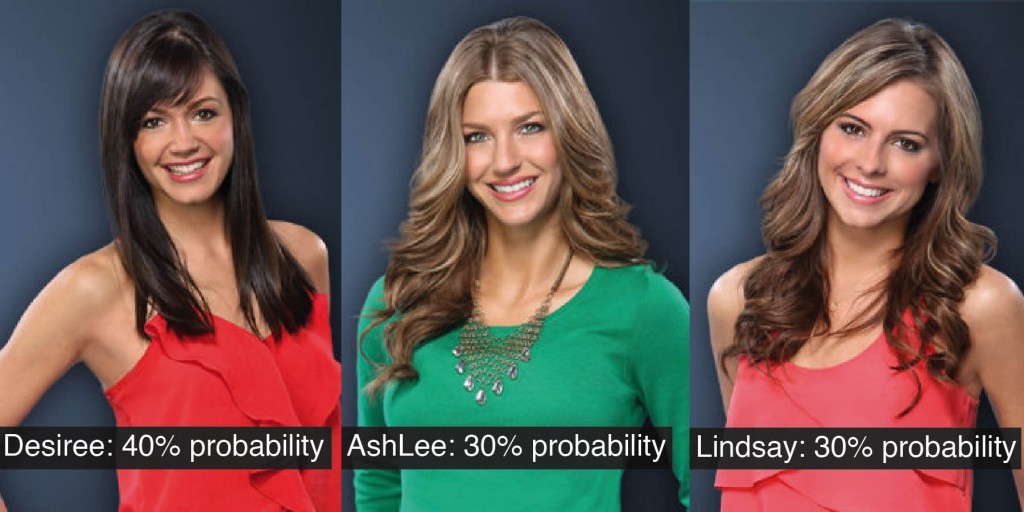 How did we come up with such standings?  Here are our notes from this week’s episode…
AshLee
* She appears mature and takes ownership for the source of her pain…..awesome of her to realize that all of this is hers and to not project it on others like Tierra…she’s showing she’s ready for a conscious lover and a real relationship. 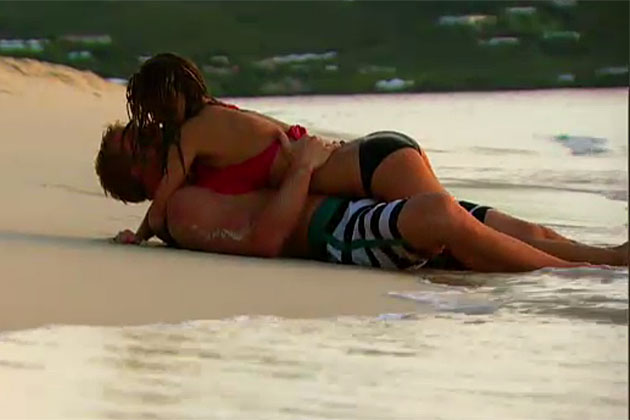 * Her level of sincerity and maturity continues to impress as she goes with the flow with a smile and by letting go bit by bit.
* On one occasion she shifted the attention to the behaviors of Tierra, which needed to be discussed due to her distraction, BUT she handled it with class and spoke in facts, not opinions, which earned his respect for her brutal honesty even more.
* By being vulnerable again about her earlier marriage she meets Sean in the heart space, even though it’s not that big of a deal.
* By taking his feelings seriously, she’s showing him that she’ll be a wonderful mother in the most trying of times.
* Sean’s response to her calling herself broken is epic… “Far from it, so take that out of your vocabulary,” shows again Sean’s superior ways of mind, heart, and soul!
* Shouting “I love Sean!” instead of “I love you!” is a tell that she’s still holding back slightly; using the 3rd person to describe something as intimate as love won’t hit his heart as hard- it’s kind of awkward actually.
Tierra
* Watching her show appreciation in front of him while shopping makes her comes across as ungrateful and is hard to watch; it shows how people can live two lives even if they are falling for someone.
* Her extreme emotional highs and lows indicate huge risks for him, if he only saw the other side, but at least he heard the truth from AshLee.
* She handles herself skillfully in challenging talks with multiple smiles.  Her confidence is unparalleled in a scary way – the fact that she wouldn’t change a thing given a 2nd chance is unhealthy and surprising to him. 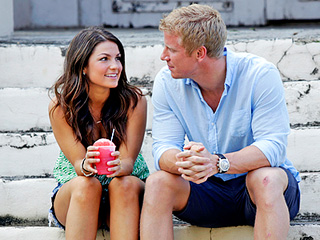 * Comments like, “These girls aren’t going to be around much longer” are huge tells and if he didn’t realize it at that moment, he might be subconsciously desiring to take on a female project, which many men do very well and is completely acceptable.
* Calling him out on being distant is awesome because she speaks her truth which earns his respect, but unfortunately it leads to another “deep conversation” and potential couples can handle only so many “deep conversations” about struggles before love becomes too much work.
* The way she states her feelings is more robotic and formal, as if she were talking in an interview or delivering a press release – hardly a way to connect deeply even though they exchange a few kisses.
* The fact that Sean walked in on her crying again after another altercation, despite his intention to introduce her to his sister, was the final straw for him to be a man and call her out as a drama queen.
* Props to Sean for taking a moment to collect his thoughts and not let the emotion of the moment keep himself enrolled in her dramatic lifestyle – this is one of the best practices for men to take on….gather yourself alone without anyone’s influence to take full ownership of the relationship you are creating.
* He earned respect from the other women by letting her go and I wouldn’t be surprised if the other women who remain go much deeper now with her gone because they now fully trust he is there for true love.
Lindsay
* She is super genuine, open, and fully ready for love!
* Lindsay exudes a great balance between enjoying the moment and being serious when necessary.
* Her girly ways and playful looks entice his masculine nature.
* She gives him amazing eye contact and their physical chemistry continues to improve at a hot pace!
* Earning a rose validates the strength of his feelings for her.
* The question that will linger is whether she was too immature during her first impression in the wedding gown quite tipsy… 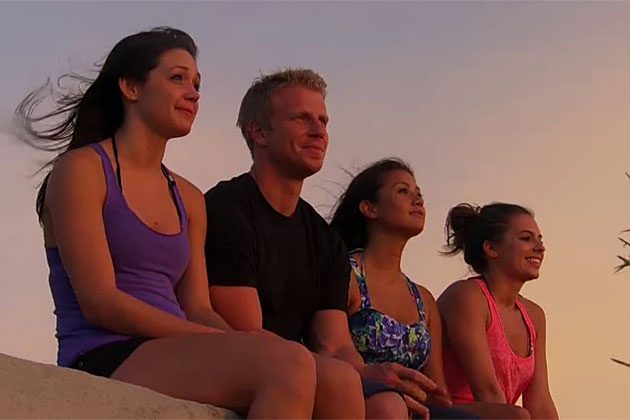 Catherine
* She opens up but doesn’t make any eye contact during the tough talks which shows how hard it was.
* The more eye contact she makes (a la AshLee), the more connected he feels to her pain, and the more he’ll feel empowered to comfort her during these personal shares.
* She needs to break through to her sexy self and this date was kind of a step sideways but it had to come out before he met her family; her self-doubt might be her undoing.
* The more she goes into her sexy edge, the better her chances at home towns!
Desiree
* Crying when asked about her family shows him that she’s real in the heart space and for those close to her.
* Their time on the swings and playing “tie me up” with the vines illustrates that chemistry is awesome!
* The fact that he doesn’t give her a rose in the group date is surprising and makes us wonder if she’s too good to be true in his eyes.
Lesley
* She seems still too skeptical and held back from truly surrendering to a man’s man. 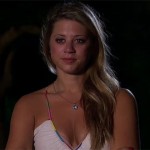 * Hesitating to tell him she loves him at this point is immature and revealing that she’s not ready at this pace and in this context.
* By suggesting they could do anything and watch football, it puts her in the little sister category.
* It seems that she needs more of a danger guy to create an intense passion that bad boys bring out to get her out of her masculine.
* By not giving him lots of eye contact or affection, she doesn’t match up with the other girls, which is why she didn’t receive a rose.
The competition is intense and no matter what, Sean will walk away with an amazing woman.  Who do you hope it will be?!