Sean took lots of risk this week with the house-full of women he is courting!  He flew Selma out to Joshua Tree National Park to go rock climbing…putting his pride at stake as she raced up the mountain before he had a chance to catch up.  Sean then tried to get the girls on his group date to get a little more aggressive by taking them to a roller derby.  He stepped on the brakes when Amanda had to be taken to the hospital after busting her chin.  And finally Sean takes Leslie H. on a Pretty Woman themed date (need we forget that Pretty Woman is about a prostitute…RISKY!)  In the end Leslie H doesn’t make it through her date and Amanda doesn’t make it through the rose ceremony.  So where does that leave Sean and his lovely ladies…?

Here is who we think the front runners for Sean’s love are:

And here’s how we came to that conclusion…

* She wears super casual outfits but they fit her figure well!

* Awesome choice of shoes to highlight her feminine nature.

* She has a super easy going and relaxed nature. 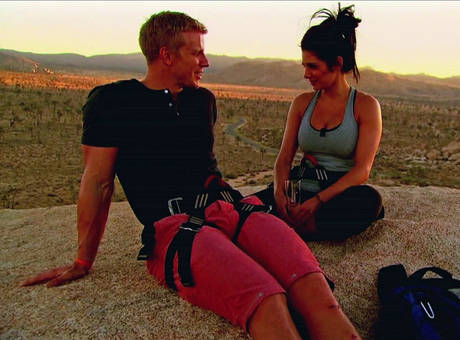 * Her attitude was less than enthusiastic at first about climbing, which might not click with him long-term in terms of how she handles challenges; however, she made up for it after she got into the moment.

* She asked him, “Why are you single?” to get deeper into him.  It was fantastic at this point to finally see what makes him tick.

* Fantastic for her to share her Muslim faith and to disclose that she won’t kiss him right away due to her strict culture (This could pose huge challenges for family compatibility).

* Sean will face a tough decision to accept the sexual chemistry without experiencing anything at all during his dating journey with Selma, especially considering that there are other women who will move faster.

* He admitted he was crazy about her but unless he gets to meet her parents, he’ll never know if they can actually become serious-serious.  Will he wait that long?

* She ended up hurting herself on the roller derby date and had to leave. 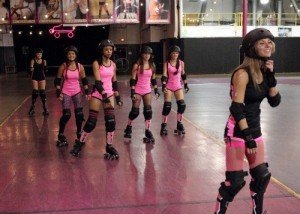 * Amanda always dresses to impress with her sense of style and accessories.

* I’m surprised that Sean didn’t give her a chance to explore more based on her look and pleasant style.  She also has a dark side that might appeal to him since nobody else appears to come across that way.  But perhaps he has already seen what the others see in her: her double sides…

* She comes across as super childish, which could work in her favor as long as she can balance it out with deep mature conversation.

* “Holy moly Batman!” and “Oh my God!” are not the kind of words that appear to fit his mature Texas style.

* Perhaps she let the fantasy of the date get to her as she didn’t focus much on him, at least on camera.

* The comment, “…finally your dress matches your smile,” shows again his class.

* Notice how Sean’s forehead cringes and he smiles less when he asks her how long it takes for her to open up.

* Leslie doesn’t like the idea of talking about past relationships, which shows that she’s wounded and struggling with being real about her past so fast, even though she has virtually no other time to share.

* “How you see your family being built?” Sean asks. It’s a great question that deserves a mindful, thought-out answer, yet Leslie describes the basics – the usual communication, trust, and love.

* Her answer about what she seeks in a man is AWESOME.  The fact that she wants to be pushed is the key to any healthy relationship and conscious growth.  She will make an awesome partner after she’s had a few more relationships under her belt to become a tad more mature.  She did put a lot of pressure on him by saying that she didn’t want to make mistakes.  Love isn’t perfect but ultimately, he didn’t feel it so regardless, he wasn’t the man for her.

* Her last remark about watching out for some of the girls due to them being there for the wrong reasons was a bit like being a sore loser.

* Tierra clearly likes to let her emotions control her lifestyle, by asking if she can go, then stopping him in the middle of a date… 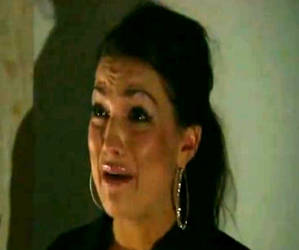 * Complaining about the whole experience over and over again is not going to show him that she can handle future emotional experiences that could arise between them.

* By not getting along with other girls she is also not coming from her best self.

* It appears that she wants to be saved from anything challenging.

* Sean’s remarks about how much she likes him isn’t good – he has far too much power in the relationship.

* By talking more about her fears of the other girls influencing his opinion and not letting him interject by interrupting his response, she becomes her own worst enemy, as he said to her.

* “Keeping my eyes on the prize,” as she said is a huge tell that she’s all about some sort of win, not developing deep love.

* He spent just a few moments with her, deep moments too.

* She didn’t get a lot of time with him, but you can see how she’s starting to let down her guard, by the inflections and variations in her voice, as if she really cares.

* Sean reassured her and he handled it brilliantly to keep her feeling good about what they have.

* Her easygoing style makes her stand out and draws him in. It’s easy for them to connect as friends and as lovers.

* Her joke about chocolate and pick up lines were really well done because she didn’t take it too serious nor make herself seem overly interested.

* The lipstick kiss on the card was AWESOME of her! 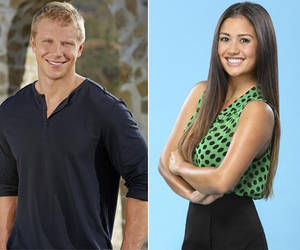 * She told him “I’m so attracted to you.”  Again, simply AWESOME at this point, especially since they click chemistry-wise, but she might be considered in the friend-zone after his remarks.

* The kiss they shared was long overdue and actually seemed legit.

* Her girly and playful nature suits his style well, but he’s neglected to ask her on a 1-on-1 date for some reason.  Perhaps it’s her food taste being vegan or the fact that he’s not completely attracted to her physically, relative to the others…we’ll see, but I give her an excellent grade of carrying herself well.  Her next best move is to become more seductive, provided she gets the chance to get out of the group environment.

* Lost some respect from the other women by giving a rose to Tierra.  He likely already knows that she’s not capable of going the distance but he wants to be extra sure.

* This is his first mistake so far – by interrupting Amanda’s time he likely has some explaining to do, but more importantly, he is catering to a drama queen.

Did the right girls go home this week?  Tell us your thoughts…