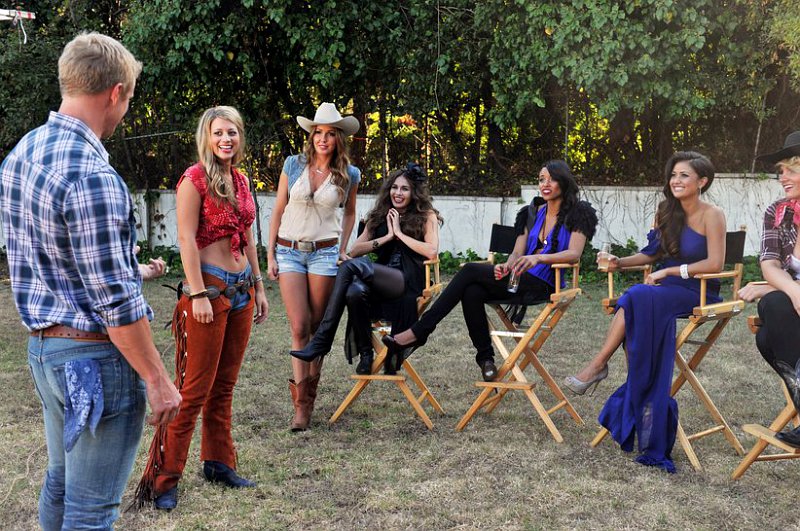 Our bachelor Sean went on a roller coaster ride of emotions this week!  There were thrills when he jumped off a roof with his date, Sarah. –Don’t worry, he made sure she was ok!– There were steamy moments as each girl on the group date dressed up in her own sultry persona to snap steamy romance novel type photos with their coveted hunk.  And there were silly moments when Sean and his date played a prank on a bridal consultant.  But the drama all came together at the rose ceremony (with one particularly dramatic girl in yellow named, Amanda…) where, sadly, Sean said goodbye to Brooke and single mother, Diana.  With all the drama of this week behind us, we ask…who has a real chance to win Sean’s heart?  Here’s who we think you can bet on… 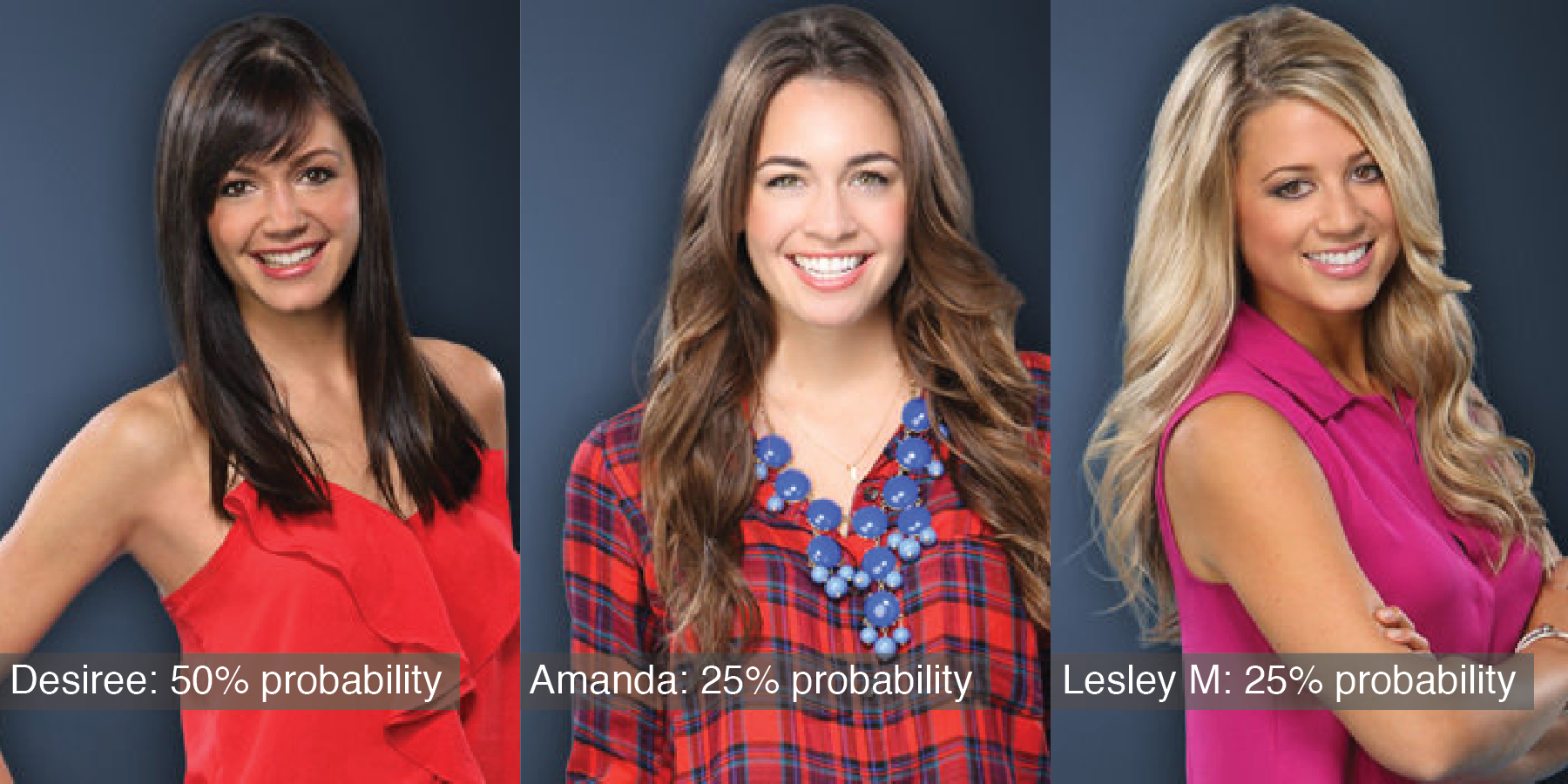 Let us know if you think we’re on the money, but digest some of our observations of the lovely ladies first:
Our thoughts on Sarah’s first date:
* wonderful color choice (bright pink) to highlight her femininity
* however medium enthusiasm when describing the crazy day which shows her femininity might be lukewarm
* loved her vulnerable story, great way to connect
* seems a bit lost and elsewhere when she talks because she looks away from Sean often
* seldom touching during the date
* outstanding evening dress
* she has a wonderful wide smile, but uses it on occasion only
* the kiss seemed a bit tame which shows that she might move too slow for him
Our thoughts on Desiree’s first date:
* wonderfully dressed
* genuinely grateful all the way around
* absolutely glowing like a goddess all the way through
* took the joke well and played one back at the end to show she can keep up with him tit for tat
* asks questions as if she wants to know everything about him, before she reveals all about her
* allows him the opportunity to define love and marriage to learn more about their potential fit and to help her connect knowing his needs (ultra wise and sincere)
* the fact that he said she has seen all sides reveals how safe and easy the relationship is forming from his perspective
* awesome environment to get close- home cooked dinner and jacuzzi helped make it sensual and intimate for revealing their truths, in dressy clothes as well as bathing suits 😉

Our thoughts on Kristy:
* seems all about winning the competition and not his heart
* sweet but is she deep enough for his mind?
Our thoughts on Tierra:
* Her expressions told him that she’s the jealous type
* Her intensity implies she’s high maintenance
* Sean’s wide eyed reaction to her talk about coming here for a reason shows he’s intimidated
* His response “Trust me…” is a line used often used by men who feel backed into a corner or who feel they need to cover up something 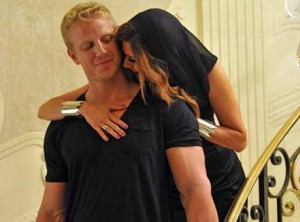 Our thoughts on Kacie:
* He clearly delays his response to her questions, indicating his reservations about her despite being as polite as can be
* It’s almost impossible for a man or a woman to break out of the friendzone.  “Once in the friendzone, always in the friendzone.”
Our thoughts on Robyn:
* Too serious of a conversation about race even though she’s super genuine about it
* It’s not ideal to talk about our insecurities right away as it puts her in a position of giving him all the power.  Learn about his taste while getting him to chase you because he’s going to say the right thing no matter what since he’s on tv and is a sincere guy
* If she were to say something ultra brief and tease him about being attracted to African American girls, that would be a smarter way to preserve the balance of power and not make it seem so one dimensional
* She’s giving him way too much admiration too fast which means she’ll have to balance out the power/direction of the relationship later on to keep the attraction at the highest level
Our thoughts on Lesley M:
* Sean asks her why she’s here and she responds with “I’m her for love.  I’m hopeful.” But the way she came across was skeptical and dubious.  Even 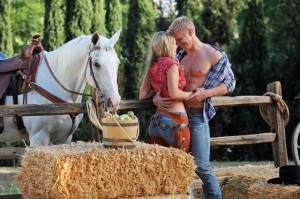 though she didn’t kiss him right away, it came across as cute and feminine and shy, slightly awkward.  By coming back and kissing him later, Leslie showed supreme social awareness.  That kinda confidence will earn her differentiation which is sure to take her far in his decision to be with her.  The more balance of masculine and feminine energy, the better, since Sean is well balanced but prefers to dip into his feminine side now and then via pranks and humor.  Her actions show that she can tune in to his needs and what’s best for the connection.
* In parting with Sean, her arms were extended as if to push him away and he held her taut.  It’s almost like her subconscious is afraid to relax into his arms and to trust him fully.  Maybe it’s the experience of being on tv or perhaps its a deeper rooted fear from some other experience.  Sean comes across as “the perfect guy” and there’s absolutely no reason to doubt him in any way at this point.
Our thoughts on Selma:
* Seems a bit obsessed with the idea of marriage
* When Sean refers to “his wife”, Selma goes into a long talk about how he should “keep saying that.”  The fact that she uses “that” shows separation.  She isn’t conversing as if she’s his wife but that his wife exists “out there.”  She’s unaware that men worry about being married to women who only want o fulfill the void.
* Took on the role of teacher in sharing with him a way to say “You are beautiful” in Farsi, but more emphasis needs to be on touch and seduction.  The longer she waits to be more silly and flirty, the harder it becomes to make him believe its genuine and usual.
* She might be a bit too conservative for him.

Those are our thoughts.  We want to hear from you!